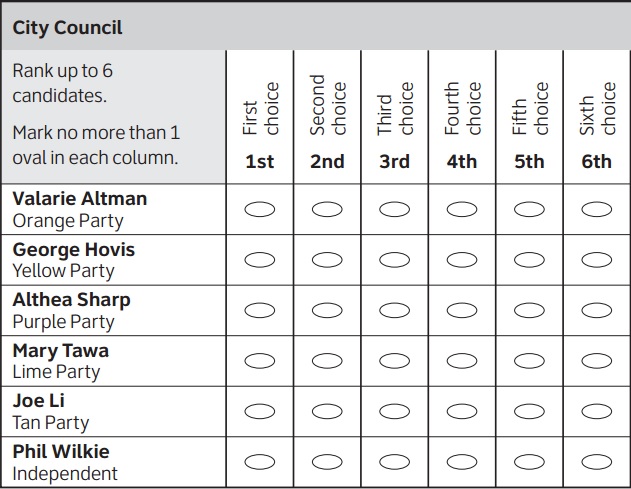 No matter what issue you want the government to address, we need to fix the system first to be responsive to the people, not special interests and lobbyists. Here is a first step. In 2016, Trump won the early primaries with about 35% of the vote because the anti-Trump vote was split between a large field of candidates. We are in danger of the same thing happening to the Democrats in 2020, with a candidate most Democrats don’t want. See: Commondreams

There is a voting system that will prevent this. Any state can adopt it – it’s used in other countries, Maine and many US cities (including San Francisco, Oakland, Berkeley and San Leandro). It’s called Ranked Choice Voting.

Ranked Choice Voting means the winner has to have more than 50% of the votes. Voters rank as many (or few) of their choices as 1st, 2nd, 3rd, etc. If their first choice candidate has the least votes, that candidate is eliminated and their vote is moved to their 2nd choice. The process repeats, eliminating candidates and moving votes until some candidate has more than 50%. For more detail about how it works, see https://www.fairvote.org/rcv#how_rcv_works

Ranked Choice Voting limits negative, partisan campaigning since candidates will want to appeal to voters beyond their base to get 2nd and 3rd place votes. It gives independents a chance, since people won’t need to worry about wasting their vote – the 2nd and 3rd place votes keep it from being a spoiler. This would benefit Republicans and Democrats alike, keeping fringe candidates from taking over the nomination in a large field of candidates splitting the vote. Ranked Choice Voting can also save money by eliminating the need for a primary and general election, or a runoff election.

Ranked Choice Voting is supported by Unite America, FairVote, Californians for Electoral Reform (CfER), the California League of Women Voters, Common Cause, Represent.US, and many other organizations.