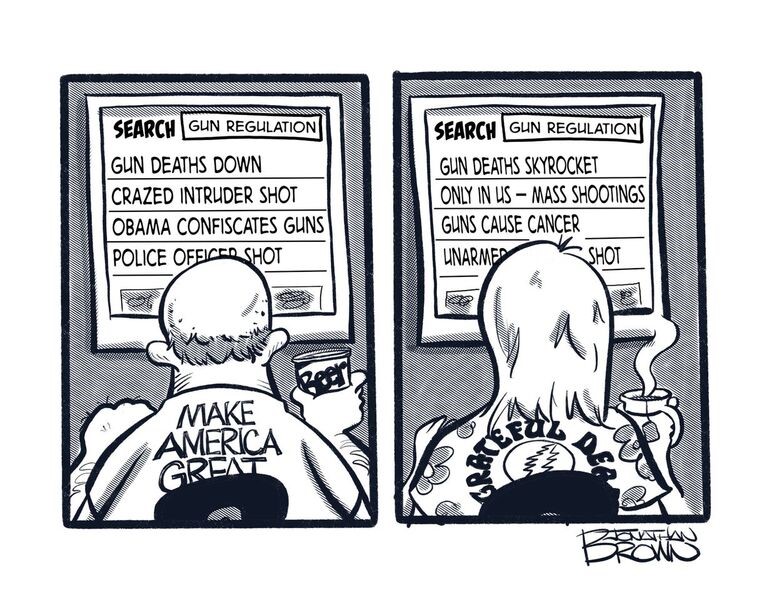 We are living the Matrix. We are manipulated at a most basic level – the reality we perceive. In the movie, computers are electronically connected into people’s spinal cords to feed fake nerve signals with an alternative reality to the brain. We aren’t quite cyborgs with electronics embedded in our brains, but the way we are always looking at our smartphones and responding to notifications, we are similarly manipulated. The Russia investigation is the tip of the propaganda iceberg – home grown special interests with lots of money give each of us a different, partisan, alternative reality. It is pumped into our brains in the form of the “news” we see.

We can’t do substantive reform until we have the same reality. Most Americans agree on many things, but Congress doesn’t act on our wishes – Congress acts on the wishes of the special interests with money that have our two parties by the gonads and thus run our country. We are neutralized by riling us up and pitting us against each other.

A “psychographic” profile of you is created online, stored, and bought and sold (you likely agreed to all this in the terms and conditions you didn’t read). They know your tendencies better than you do. They know whether you like conspiracy theories or videos of kittens playing with yarn. Propaganda is now disguised as “news” that appeals to your psychographic profile to get you to not only click, but share.

An online search returns millions of results, but only the first few pages are noticed. So ranking is critical. They are ranked not only on relevance (containing your search words) and your psychographic profile, but also by popularity – how many others have clicked on those stories. This is gamed by using computer program “bots” and eye-catching click-bait – suggestive or controversial tags to get people to click – (e.g., “Obama bans pledge of allegiance”). We are conditioned to click like monkeys in a lab experiment.

On Twitter, for example, bots retweet and tag widely-followed and gullible people (such as, say, the President), hoping one of them will retweet and magnify the effect. Research has found that outrageous stories which, based on your profile, push your buttons are most likely to go viral (if you thought your spouse or parents were good at pushing your buttons, that’s nothing!). Special interests use this research. Debunked stories never disappear, like the living dead, circulated by our gullible friends.

There is a solution. Newspapers, websites and other sources of stories (rather than each story itself) should have a credibility rating that determines their ranking. This should be a large factor in deciding what is ranked highest in a search, along with key word matching and number of views. The credibility ratings would like a credit rating, from multiple fact-checking sites, developed over time (e.g., from Newsguard, AllSides, MediaBiasFactCheck). Search results could thus be ranked based on credibility (not just literal truthfulness, but also balance), rather than the number of likes from gullible humans and bots. By ranking the source, instead of the story, the problem of the story going viral before it can be fact-checked is addressed. The media would be incentivized to make stories more balanced to obtain a higher rating.

There would of course be an outcry that the fact checking sites would then control what we see with their bias. This would infringe on the free speech rights of the special interests and bots who currently manipulate and neutralize us with deliberately misleading stories. We need to demand to be unplugged from the Matrix and given the same, true reality. It’s time to take the red pill.