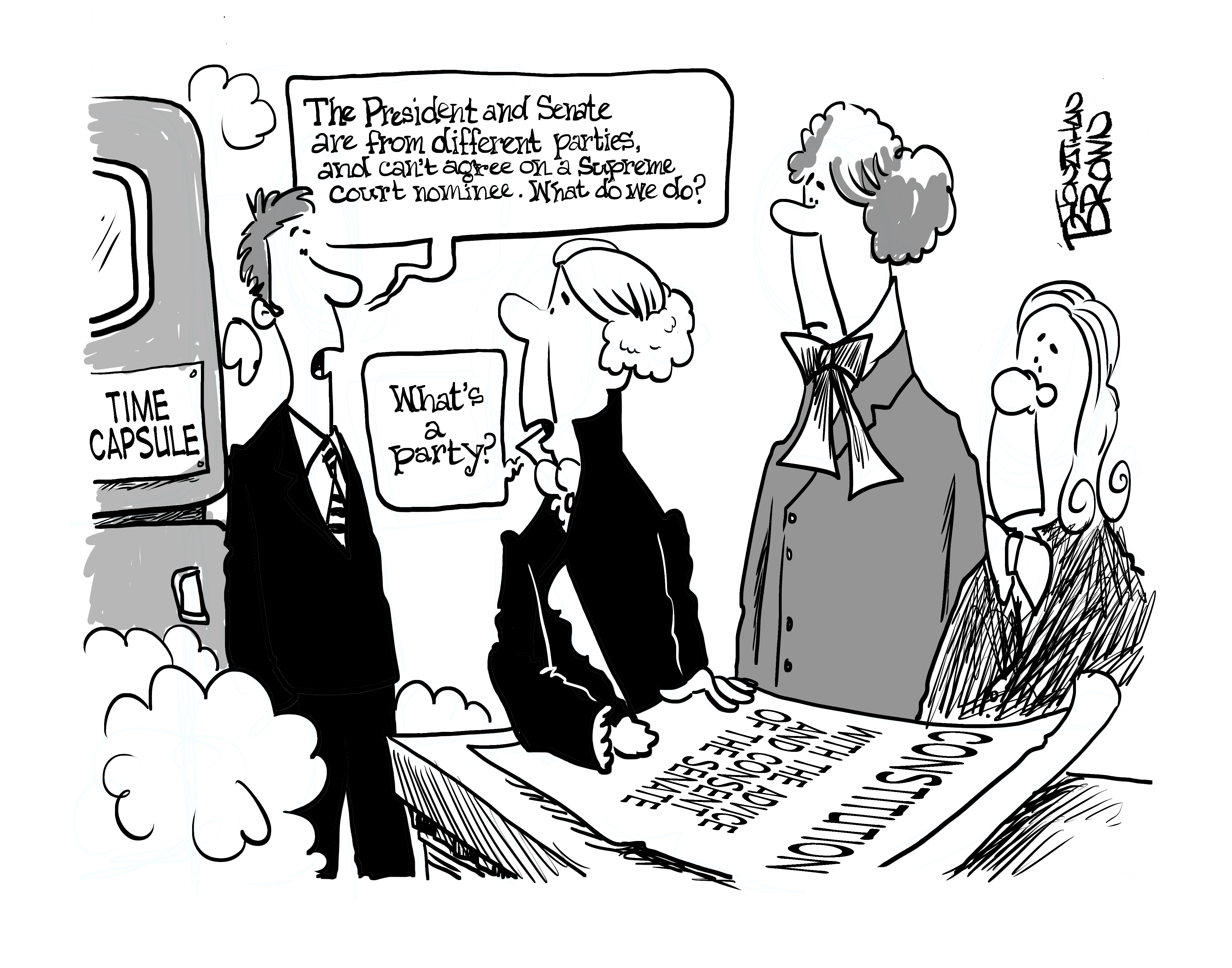 Politics is partisan and gridlocked because of the system. There are grassroots efforts having success at fixing it. They need your help.

Republicans and Democrats have been in gridlock, fighting each other for decades, using problems as talking points rather than something to be fixed. 3rd party presidential candidate Ross Perot railed against the $4 trillion deficit in 1992. It’s now $20 trillion. While they fight each other, the deficit is out of control, the heartland is out of work, income inequality has soared, education has fallen behind other countries, college and health care costs have soared and mass shootings have become commonplace. We have the world’s best military but our infrastructure is crumbling.

A Harvard Business School study concluded the problem is lack of competition with our two party system. It is a classic duopoly (shared monopoly).

The two parties act as red and blue gangs protecting their turf. Incumbents gerrymander district lines to stay in power, cramming all the other party’s voters in a few districts. This not only makes the incumbents districts extremely partisan, where the primary decides the winner, the effect is even worse for the other party’s districts. Primaries where only their party can vote eliminate moderates who would otherwise win the general election.

Also, almost all states have sore loser laws, written by the Reds and Blues, keeping moderate incumbents from running as an independent when they are primaried out by a radical challenger. Lisa Murkowski of Alaska had to run as a write-in candidate to overcame this in 2010. Joe Lieberman was fortunate to be in Connecticut, one of the handful of states without a sore loser law. He lost the Democratic primary in 2006, but won the general election as an independent. A number of prominent moderates have retired recently for this reason – they are being hunted to extinction. The system has had the unintended consequence of forcing the Reds and Blues in Congress to be more partisan than the American people. 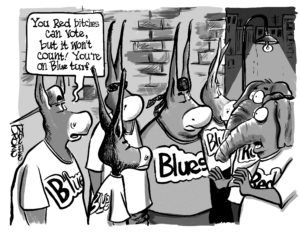 With increased partisanship, compromise has become a dirty word – if this attitude was applied to business, no contracts would be signed and the economy would come to a standstill. Our Constitution was born of compromise and requires compromise to function, The checks and balances and division into 3 branches of government inherently lead to gridlock in the absence of compromise (except for the rare times when one party controls all branches, only to have any progress undone by the other party when it is in control).

The Reds and Blues each have their own colluding media and have learned that anger and half-truths sell on the Internet. We are tribal animals, and just like in sports, we only notice the fouls of the other side. We nod at the demonization of the other party. We de-friend those of the other party. We let them turn neighbor against neighbor, brother against sister, parents against children. Our enemies see this as a weakness and inflame it. It is hard to leave these gangs and become an independent, law-abiding citizen – you are ostracized as a RINO (Republican In Name Only) or a DINO.

Each of us needs to stop watching Fox News and MSNBC and clicking on click-bait that feeds us ever more outrageous links to keep our attention. We need to start getting our news from more balanced sources, such as: 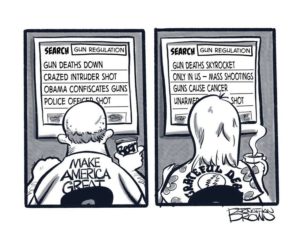 A house divided against itself cannot stand. Abe Lincoln

If you are not part of the solution, you are literally part of the problem. Is this the mess you want to leave to your children? The U.S. is sending an S.O.S. When your grandchildren ask what you did when the country was in crisis, what will you say? I was too busy watching Game of Thrones to volunteer and I couldn’t possibly skip my latte and give $5?

We need to fix the system. Congress won’t do it – they are the problem. But a grassroots reform movement is growing – people are standing up all across America to end partisanship and fix our government. They need your help. Pick an issue and pitch in.

End Gerrymandering. An example of gerrymandering is after the 2010 census, the North Carolina Republican legislature drew the lines so 10 of 13 districts elected Republicans, even though more than half the voters in the state were registered Democrats. Arizona and California have established non-partisan redistricting commissions for Congressional districts. Hawaii, Idaho, Montana, New Jersey and Washington have bipartisan commissions. Ohio voters (with a 75% majority) on May 8, 2018 approved bipartisan redistricting reform that requires approval of both parties in the legislature. There are anti-gerrymandering measures on the ballot in Nov. 2018 in Colorado, Michigan, Missouri and Utah. The Michigan measure started with a Facebook post by a woman in her 20s – “I want to take on Gerrymandering in Michigan. Who’s with me?” (https://www.votersnotpoliticians.com/katie_fahey) Here are groups collaborating to reform Gerrymandering – help them!: http://www.endgerrymandering.com/

The Reds & Blues perpetuate the narrative that a vote for an independent is a vote for the other gang. Ranked Choice Voting allows you to vote for who you really want (not the lesser of 2 evils) without wasting a vote. You vote for a 1st, 2nd and 3rd choice. If no one has a majority, the candidate with the least votes is eliminated, and those second choice votes are then counted. The process repeats until someone has a majority of the votes. This forces candidates to moderate their positions to appeal to the 2nd choice votes. It is implemented by a number of local governments (e.g., San Francisco), and has been implemented at the state level by Maine in time for the 2018 elections. FairVote is helping lead the charge on this: www.fairvote.org

The Reds and Blues control who gets on the ballot in numerous ways, making it hard for independents to get on the ballot. One solution is open primaries, where the top 2 or 4 candidates are on the general election ballot. This also puts pressure on candidates to appeal to independents and the other party’s voters. Moderates would no longer be primaries out. California and Washington have adopted top 2 primaries. See

Partisanship has gotten more extreme over the years, with moderates becoming an endangered species. Just a few independents in a state legislature can make a huge difference. If neither the Reds nor the Blues have a majority, the indies can force them to compromise. A couple indies in Alaska formed a bipartisan majority in 2016 and addressed the budget deficit that the majority Reds had been ducking. Indie-minded senator Cheri Jahn in Colorado got a transportation bill passed by actually talking to both sides when they were at an impasse. She left the Democratic party to become an independent in 2017. In 2001, Senator Jeff Jeffords left the Republican party to become an independent, changing the 50-50 balance of power and caucusing with the Democrats. Jeff Flake (retiring due to primaried out threat) and a few moderate Republicans refused to toe the party line, and forced an FBI investigation of Supreme Court candidate Brett Kavanaugh. These are examples in action of the Fulcrum Strategy of Unite America – an organization supporting independent candidates at the state and federal levels. Imagine what could happen with a few independents in the evenly divided US Senate. Unite America is supporting 2 senate candidates in 2018 (Craig O’Dear [Missouri] and Neal Simon [Maryland]), along with a slate of state legislature candidates in Colorado, Washington and other states. See https://www.uniteamerica.org/

Political Philanthropy is another solution. Here is an organization providing financial support for moderate, solution-minded candidates and representatives in California so they aren’t dependent on the parties and special interests for funding. This has already been successfully for a slate of representatives: https://www.governforcalifornia.org/

It used to be that Congressional Committees determined what bills were voted on. Since the mid 1990’s, the Hastert Rule in the House of Representatives has been used by the Speaker to only allow the House to vote on bills where a majority of the majority party supports it. Thus, bills supported by a bipartisan majority of the House are denied a vote, and the partisan divide and gridlock prevails.

The ReFormers Caucus of Issue One is working with 2018 Congressional candidates to try to convince them to reject party control of what gets voted on. https://www.issueone.org/reformers/

There are a host of other reform groups, including those addressing money in politics, such as 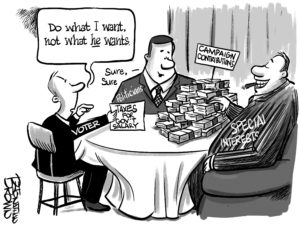 Here is a list of 90 groups dedicated to reducing partisanship and improving government, which are all coordinating: https://www.bridgealliance.us/.