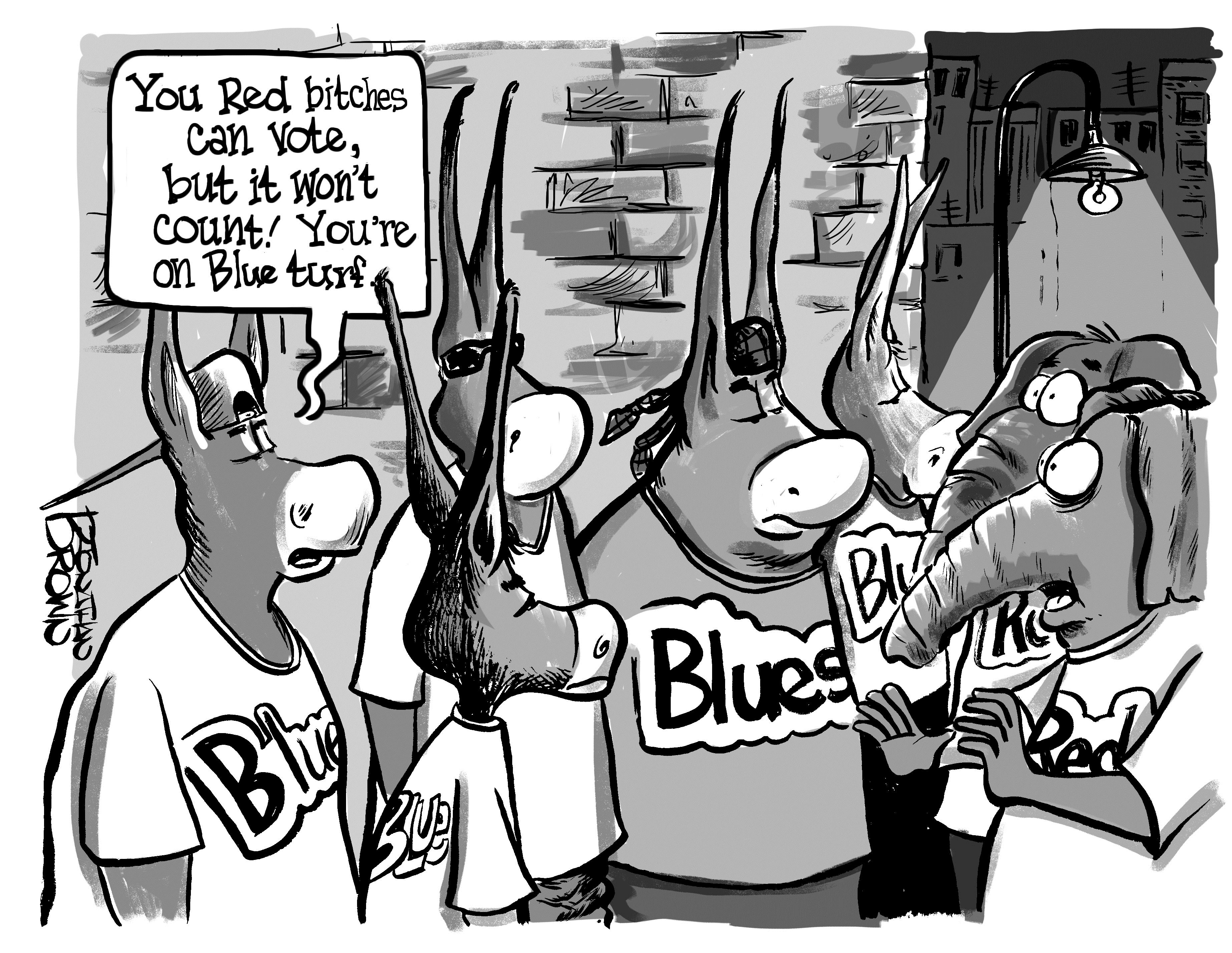 The Supreme Court just punted on Gerrymandering – Now what?

If you don’t like the hyper-partisan and gridlocked U.S. government, I’ve got your villain – Gerrymandering. No matter what substantive issue you want government to deal with, Gerrymandering must be fixed first to unlock the gridlock. Gerrymandering is a problem that has been festering for centuries, but now a voracious, antibiotic-resistant strain has emerged. Here’s the scoop:

The word “Gerrymander” comes from Massachusetts governor Elbridge Gerry signing a bill in 1812 that redrew the districts in the Boston area in the shape of a salamander. This gave an advantage to his Democratic-Republican Party. Under Art. I, §4, cl. 1 of the Constitution, each state decides its election rules, including drawing district lines, subject to a potential Congressional check on that power:

“[t]he Times, Places and Manner of holding Elections for Senators and Representatives, shall be prescribed in each State by the Legislature thereof; but the Congress may at any time by Law make or alter such Regulations, except as to the Places of chusing Senators.” U.S. Constitution, Art. I, §4, cl. 1.

Big surprise – most state legislatures give the power to draw district lines to – themselves. Incumbents in office draw districts to get themselves re-elected – they select their voters. Once a party gets control of the legislature, they can maintain their seats even if the majority of voters vote to oust them. Every 10 years, after each census, the lines are redrawn. A larger number of opposition voters are crammed into a few districts, while the smaller number of voters for the incumbents are spread across more districts, giving majorities in more districts.

Although Gerrymandering has been around since 1812, and has been used by both parties, the Republicans have weaponized it to a new level in recent years. In the “Unholy Alliance,” Republicans deviously teamed with black leaders in the 80s and 90s to redraw districts in the South by promising more black representatives. They crammed blacks into districts where they could elect blacks to the House. The result was more black representatives, but this deal with the devil ended up replacing white Democrats with Republicans in many more districts to give Republicans a majority in the Southern states. This was sold to the public and courts as simply complying with the Voting Rights Act, which prohibits diluting minority votes. The Voting Rights Act has had the unintended consequence of facilitating Gerrymandering.

The Republicans took Gerrymandering nuclear after the 2010 census. The “REDMAP” initiative was a campaign to elect Republicans in key state legislatures and governorships after Obama was elected and before the 2010 census, so they could redraw the districts to favor Republicans. This effort took advantage of the avalanche of dark money from political contributions after the Supreme Court’s Citizens United decision, exponential advances in mapping software, and the mother lode of Internet tracking data that identified how people would vote. The result was that the 2012 elections produced a sizeable Republican majority (234-201) in the House of Representatives, even though a majority of voters voted for Democrats. The House is supposed to represent the people, unlike the Senate and the Presidency, which depend on the Electoral College and represent the majority of states.

The Gerrymandering is disguised to make it appear reasonable to the people and courts. In Southern states, the Voting Rights Act is used as cover, as described above. Elsewhere, the number of registered Republicans and Democrats is touted by the map drawers as being almost equal, and thus fair. But the line drawers knew from their data that more Republicans actually voted, so those districts are practically guaranteed to elect Republicans. The lines were drawn in secret, and only presented in legislatures where Democratic representatives could see them after the fix was in.

Gerrymandering causes extreme partisanship and gridlock
The Republicans shot themselves in the foot with the REDMAP campaign. While the Republicans won control of the House, an unintended consequence was that they lost control of their party. When a district is solidly Republican, only the Republican primary matters. Moderate Republicans are then vulnerable to a more conservative challenger. Thus, the tea party took over, ousting moderate Republicans. The same happens in the districts where all the Democrats are crammed – moderate Democrats lose to challenges from further left. This is exacerbated by “sore loser” laws in most states – a primary loser can’t run as an independent (another law intended to protect the Republican and Democratic parties that has back-fired). This has led to moderates of both parties becoming an endangered species. Recent years have seen a flood of moderates retiring after being ousted by a radical in the primary (where few moderates, but all die-hard radicals, vote). This caused non-compromising gridlock in Congress. Obama’s agenda was blocked after the 2012 election. The same is now happening to Trump. Nothing important is getting addressed.

People in states with an initiative process have been able to overrule the legislature and establish independent, non-partisan commissions to draw district lines. These states include Arizona, California, Hawaii, Idaho, Montana, New Jersey and Washington. But about half the states don’t provide for voter initiatives, and thus change must come from the legislature – the same legislature that cemented themselves in power with Gerrymandering. Even in states that have passed initiatives, since the initiatives are laws, and not constitutional amendments (which require a supermajority vote), some state legislature have been passing laws to gut the initiative. Thus, the only practical option, absent an overwhelming voter revolt to oust the legislatures, is the courts.

The Court didn’t deny that the Gerrymandering was partisan and unjust in John Roberts majority opinion:
“The districting plans at issue here are highly partisan, by any measure. …The first case involves a challenge to the congressional redistricting plan enacted by the Republican-controlled North Carolina General Assembly …. He further explained that the map was drawn with the aim of electing ten Republicans and three Democrats because he did “not believe it [would be] possible to draw a map with 11 Republicans and 2 Democrats.”” (Opinion p. 2)

“The second case before us is Lamone v. Benisek …. the Maryland Legislature—dominated by Democrats—undertook to redraw the lines of that State’s eight congressional districts. …The Governor later testified that his aim was to “use the redistricting process to change the overall composition of Maryland’s congressional delegation to 7 Democrats and 1 Republican by flipping” one district.” (Opinion p. 5)

“Excessive partisanship in districting leads to results that reasonably seem unjust. But the fact that such gerrymandering is “incompatible with democratic principles,” … does not mean that the solution lies with the federal judiciary.” (Opinion p. 30)

The dissent penned by Elena Kagan was empassioned:
“If left unchecked, gerrymanders like the ones here may irreparably damage our system of government.” (Dissent p. 2)

“At its most extreme—as in North Carolina and Maryland—the practice amounts to “rigging elections.” (Dissent p. 8)

“Of all times to abandon the Court’s duty to declare the law, this was not the one. The practices challenged in these cases imperil our system of government. Part of the Court’s role in that system is to defend its foundations. None is more important than free and fair elections. With respect but deep sadness, I dissent.” (Dissent p. 33)

As decided by the Supreme Court majority, unless there is racial discrimination, or a violation of one person, one vote (unequal districts), it is up to the states, with a check by the federal government. The Fairness and Independence in Redistricting Act, an anti-Gerrymandering bill, has been introduced in Congress, and failed, every year since 2005. Thus, it is up to the people. The people are mobilizing, and have had some recent success. The time to change is now, before the 2020 census.

In the 2018 elections, redistricting reform was passed in Ohio, Michigan, Missouri, Colorado and Utah. These won’t take effect until after the 2020 elections and census. The Supreme Court decision will overturn the lower court decisions in Ohio and Michigan, insuring that they will continue to have Gerrymandered districts for the 2020 election. On the bright side, Pennsylvania was ordered redrawn in 2018, and the Supreme Court declined to stay that. Courts ordered changes in Virginia, and on June 17, 2019 the Supreme Court declined to hear a Republican challenge.

What’s next?
As with any significant change, it is up to the people. This means initiatives in states that allow them, and trying to get a super majority of voters to oust the bastards in states that don’t (North Carolina and Maryland don’t). The following are organizations fighting for fair redistricting – they can use your help:

Brennan Center for Justice publishes the status of citizen efforts in different states for redistricting reform.

You may want to watch “Slay the Dragon” – a documentary about Gerrymandering that premiered at the 2019 Tribeca Film Festival: